How Does A Fish Finder Work? [Explained For Beginners]

HOW DOES A FISH FINDER WORK? The world is changing rapidly with the help of technology. Technology has taken the world at a different level.

Things that seemed impossible are now done with a snap of a finger, just like fishing has become easier.

Fishing especially sports fishing can be very tedious as you don’t know where the fishes are.

If you’ve ever wondered about how easy fishing would be if you could know where the fishes are, then a fish finder should be on your MUST HAVE list.

These small portable instruments use sonar technology to reveal the location of the fish, so you do not waste time throwing in an arid place. Finally, you won’t have to lie to your friends and colleagues about the escaped monster!

In this article, we’ll explain in details how does a fish finder work and everything else you need to know about it.

So, let’s get started!

What Is A Fish Finder?

A fish finder is a device used by the fishermen to detect the position or location of fish under the water using transducer. The fish finder is used to-

How Does A Fish Finder Work?

Most of the modern fish finder use transducer. The transducer is nothing more than a probe, which sends sonar signals into the water.

If there is nothing in the water, the sonar signals continue their course and disperse.

If they encounter an object, they “get stuck” so to speak, bounce back and return to the probe. The probe sends them to your device, so you know that there is something under water. It could be a fish, or even a wreck.

All we have said so far applies to fish finders used for saltwater and freshwater fishing.

There is also a type of portable fish finder, which is particularly suitable for shore fishing, and which also includes wireless fish finder.

In this case, the transducer is contained in a plastic sphere, which must be linked to the line, and launched directly into the water.

The sonar will start sending data after a couple of minutes. These are devices that allow a limited viewing depth of around 40-50 meters.

But for those fishing from the shore, from a quay or from a bridge, in many cases, this depth is more than enough.

The Invention Of The Fish Finder

Though they have introduced it to the American market, they were not the first to make such a device. This distinction belongs to the Furino brothers from Japan.

But in the 1950s, Darrel and Carl Lowrance, a father and son team, developed a kind of fish finder using the sonar technology he had learned from the navy.

He researched and modernized the technology to use it as a device to find fish under water. With time, because of it’s benefits and ease of functions it became popular all over the United States.

How to Read Fish Markings

Reading the fish markings is the biggest difficulty that anyone who uses a depth sounder meets for the first time. To overcome this problem, many manufacturers now choose to show fish also using icons.

Reading the fish markings needs practice as it is different in different devices.

Different Parts Of A Fish Finder:

There are two main parts of a fish finder: Transducer and Display

In modern fish finders, there are some additional fitments available, such as-

Bluetooth, iOS or Android Operating systems. You can use these fish finders with your mobile phones. They even have GPs integrated.

The Different Types Of Fish Finder

It is very important to have a clear idea of the different types of fish finder before you set out to buy one.

The most common types are the down swipe and side scan. Both technologies work in a similar manner.

However, the signal transmission system is different for both of them:

The down view function uses frequencies from 450 kHz up to transmit a background image that reaches a level of detail close to that of a photograph.

So you can clearly see all the objects on the seabed. With the CHIRP this thing is not possible, since the objects are indicated by bands of color, you do not see the well-defined forms.

You will then have to know how to read the images, but do not worry, below we explain the ABC.

The side view function provides side images of the seafloor.

In practice, you can see everything that is on the right and left of your boat. This function works exactly like the down view-only the perspective changes.

These features are available through the best echo sounders for sea and lake fishing. Portable fish finders, especially if designed for shore fishing, usually do not have them.

02. Can a fish finder work out of water?

Answer: No, it can’t and you shouldn’t do so.

03. Why we need transducer in a fish finder?

Answer: Transducer is the electrical system that makes everything work. It changes the electric energy to acoustic energy and back again. Thus, we can see the reading.

We hope by now you have a clear idea of how does a fish finder work. In today’s life, everything is dependent on technology.

Why should our daily life be out if it? With the fish finders, fishing has become so easy, whether it is small scale sport fishing or large scale commercial fishing.

Fish finders have helped to save time, money and work for which we are grateful.

SOME IMPORTANT BLOGS OUR READERS LOVE:

How Long Does A Fish Sleep?

Is Fishing In The Rain Good for Catching Trout?

How to Hook a Minnow?

How to Fish with a Spinner : Effective Tips For You? 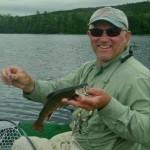